We’ve said it before and we’ll say it again. Shopping cart handles one of the filthiest objects you can put your hands-on. A recent laboratory study out of South Florida paints the ugly picture. Jeff Weinsier, a local news reporter visited 10 different stores from Davie to Coral Gables and Liberty City to Westchester. Using a special swap kit, Weinsier test the handles of multiple different cart handles. 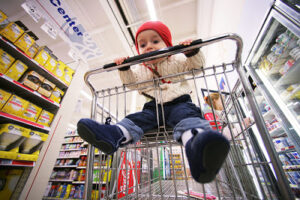 The results showed seven of the 10 samples had high levels of bacteria. But, three of those seven were off the charts. the bacteria counts were in the billions.

You can see the actual test results here.

“Some forms of strep throat will be caused by bacteria,” said Smith. “They picked up a bacteria called pseudomonas. It can also cause infections.”

Weinsier watched as several mothers put their children in the shopping cart seat next to the handle.

In a time when the threat of coronavirus is elevating daily, it is imperative that you not only provide shoppers with wipes at the store entrance but educate shoppers on the importance of wiping down their cart before each use. This can be achieved by placing signage near your nested carts.