Many towns across the U.S are starting to crack down on shopping cart thieves. Chief Stuart Roberts of Pendleton, Oregon says many businesses in his jurisdiction are not securing the carts overnight, and with the growing homeless population, thefts of the carts are becoming a real problem. 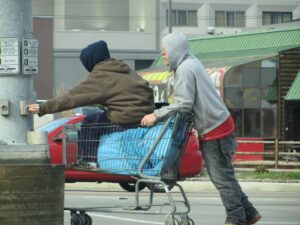 “We’ve communicated with those retail outlets and have asked for their cooperation and assistance in securing those carts,” Roberts said.

Shopping cart theft is not just a drain on the impacted business. Most stolen carts end up being abandoned, and if the cart user is arrested, it’s a problem for PPD.

“If we end up taking an offender into custody who has a shopping cart, we’re also responsible for that property,” Roberts said. “We’ve got to bag it all up, we’ve got to transport it, and we’ve got to store it. It just becomes very problematic.”

In many countries, to avoid the problem of carts that go missing, shoppers are required to pay a small deposit that they get back when the cart is returned.